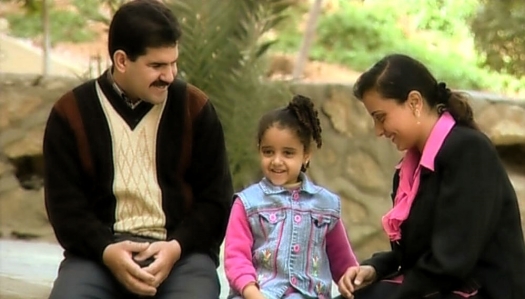 When Helena gave birth to a daughter she was shocked to discover a severe disability. But God still had good plans for them. As told to Miracle Channel.

Helena Yousef lives in Egypt where she works as a nurse. When she finished her studies and got married, her prayer was always that God would give her healthy children. It didn’t matter to her if they were boys or girls. All that mattered was that they were healthy.  As a nurse she was well aware of the struggles of families with sick or disabled children, not to mention the shame and guilt attached to having a child with disabilities in their culture.  Yet the day she gave birth to her baby girl, she got the shock of her life.

-Helena already knew that she was expecting a girl, and she had already named her Esther, explains her doctor as Miracle Channel documents her story.

When one of Helena’s friends, who is a nurse, took the baby right after the delivery to clean her and wrap her in a blanket, she noticed that something unusual was going on with the baby’s leg. She called the doctor and asked him to look at the foot.

-As soon as I looked at the foot I saw that it was bent at an unnatural angle up towards the leg. Helena noticed that I studied the foot and got very worried, the doctor adds.

Helen didn’t understand what was happening, but an alarm bell went on inside her.
-Why were the doctors whispering? Why were they looking at each other like that? Nobody wanted to talk to me, she remembers.

One of Helena’s nursing friends says that they all felt terrible. They didn’t know how to break the news that her daughter had a disability.

-The first that came to mind was that the leg was broken on the way out, but when I looked at it closer I realized that this is how she was made, her friend says.

Helena’s husband remembers that the doctor said that the leg would heal by itself, but when looking at the leg, he knew that would not happen.  It is important to understand that a disability is a challenge to be born with anywhere in the world, but for a girl, who is already at a disadvantage because of her gender in the Arab world; a disability is something that will mark her for the rest of her life.

Helena recalls that one of her more courageous nursing friends approached her and told her the truth. The foot was greatly damaged.

-I asked if I could see the leg and then I understood that she was telling me the truth. Esther would need to have surgery where they would break her leg and recast it. It was very hard for me to hear this. She was the great joy of my life, and I asked God how could this happen. Some people told me that this was God’s will. One woman even told me that God was punishing me, says Helena.

Every time Helena took Esther outside it was an ordeal for her. She felt that people were judging her and her precious baby girl. One lady even said to her, “not only did you get a girl, but she had to have a disability as well”. These words hurt her greatly.

-I couldn’t understand why they would want to hurt me like this. Didn’t they understand the pain? One lady who had two girls said that she was grateful for her girls, but at least they were healthy.  Others said I had to be thankful.  Some had children with cancer. Some were paralyzed or struggled with mental issues. Some were injured in accidents.  I knew I had it better than others who struggled with more serious issues, yet I also knew that there were people who were better off than me again.

Helena’s husband remembers that his wife kept crying. She was always embarrassed and never knew how to reply to all these comments.  It was a very difficult time for both of them.

-I kept asking God why. I knew that my husband was sorry as well but he kept up a better front than me. He always said that I was God’s daughter and that God had a plan for me. “Don’t be sorry”, he said.  “God is able. So what is Esther limps a bit? God is in control of her life as well”, Helena recalls.

-When I was alone with Esther in our apartment I used to study her. I wondered what she would be like when she got older.  Would she need special shoes? Would you be able to see that something was wrong with her?   Could I fake it so it would look like both her legs were the same length?  How would she be able to walk? Then I would start crying. My husband would often find me like this when he came home from work and he would comfort me and say that we have prayed, and now God would do his part.  He reminded me to be grateful and kept encouraging me.

The couple sought the advice of several medical doctors. One said that Esther would need surgery in a year; another said they couldn’t do surgery before she was an adult and her leg had stopped growing.  They were greatly relieved when they found a doctor who took several x-rays and said that the deformity could be fixed with a cast.

-When she was three months old we put Esther’s foot in a cast and it was very painful for her. We never knew why she was crying. Did the leg hurt or did she have a tummy pain? After three months they removed the cast for 15 days to give her leg a chance to breathe and to observe the wounds. This procedure we repeated twice. The doctor was very encouraging and said that it was moving in the right direction, says Helena.

The doctor also made a little contraption with a special sole to keep the foot in place. The last time they removed the cast the doctor gasped and shouted “Hallelujah”. They had their miracle. Esther was nine months old and her foot was in place.

The doctor says:
“This could have taken a very long time, with or without medical help. This was God’s miracle. Even the doctor who did the casting had never expected it to go this fast. Personally I believed that Esther would always have a small, permanent defect for the rest of her life, and it is incredible how the foot has healed completely. God is good.

Helena says in retrospect that she regrets how she blamed God. Instead she feels that God was with them all along, and that it was not God’s fault that  Esther was born with a disability. Instead God was on their side and desired for Esther to get well.

-I really regret what I told God and how I blamed Him.  Esther is almost 6 years old now and she can wear what she wants, and every time I see her I am filled with such gratitude. God surely completes what He starts!

Miracle Channel is a 24 hour Arabic satellite channel that broadcasts the gospel to the Arab world on Hotbird and NileSat.  Please considersupporting this ministry with a gift today.Watch us live